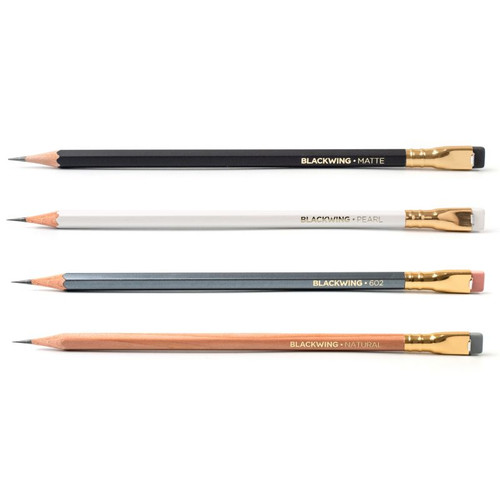 Blackwing Pencils have a cult-like following due to the long history, recognized quality, and the experience of using these pencils. Offered are four pencils, each with with a different look and lead type, that come in a 12-pack gift box.

Blackwing Matte, soft (3B) - Ideal for musicians, woodworkers and those who prefer a soft, dark line, the Blackwing Matte is the softest of the four Blackwing models. It features a timeless matte black finish, iconic square Blackwing ferrule and black eraser.

Blackwing 602, firm (B) - Praised in the New Yorker, The Boston Globe, and Boing Boing among others, the Blackwing 602 features a firm and smooth graphite core that helps it deliver on its promise of “Half the Pressure, Twice the Speed.” Blackwing 602 pencils feature a gunmetal grey finish and iconic square Blackwing ferrule with a pink eraser.

History: The Blackwing pencil is legendary. It is not just a pencil, it’s an experience. Loved the world over for its quality, iconic shape and quality of graphite, it has inspired the creative work of many throughout the ages. Introduced in the 1930’s, some of the world’s illustrious Grammy, Emmy, Pulitzer and Academy Award winners were users of the original Blackwing 602 pencil. The list of known fans includes John Steinbeck, Stephen Sondheim, Leonard Bernstein, Truman Capote, Quincy Jones, Vladimir Nabokov and Chuck Jones, who used his Blackwing pencils to create Bugs Bunny and countless other Looney Tunes characters.

Blackwing pencils are available individually in our stores.